The Benefits of European Integration: Don’t Forget What We Learned Between 1957 and 1992

It’s too bad Britain can’t admit that it made a regrettable mistake, ask for forgiveness, and call for a re-vote on Brexit. Now that the country’s leadership has transitioned and the Germany and France are calling for a swift exit, the chances of a “do-over” are remote at best. The country can mitigate the damage by mirroring the EU’s economic and political policies, procedures, and standards as closely as possible.

The referendum was largely driven more by a desire for political independence, especially immigration control.  The economic arguments for leaving (freedom to establish independent trade agreements with developing countries like China, and lower overhead costs) are outweighed by the benefits of being part of a huge and harmonized global trade bloc. Exporters from developing countries like China have enough trouble trying to meet the requirements of one trading bloc; they don’t want more permutations of standards, forms, and tariff and non-tariff barriers to confuse, delay, and impede their ability and economic interest in exporting to the UK.

Yes, Brussels is bureaucratic and compliance with EU regulations comes at a cost. However, the European Economic Community’s elimination of internal customs duties, the harmonization of external trade policies, and the common currency (which Britain never adopted, to be clear) drove stock markets up 20-50% preceding the formation of the single market (European Economic Area) in 1992, the extension of the European Economic Community to the European Union, and the adoption of the Euro as a common currency. To begin dismantling the structures and institutions that were built over so many years since the 1957 Treaty of Rome signals an unfortunate and destructive mid-life crisis. The UK will be economically worse off outside the EU. 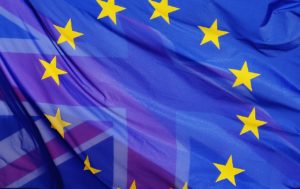 In 1989, I pointed out that Europe’s impending integration (the common currency was adopted in 1992) was analogous to a corporate merger that helped to reduce transactions costs and revitalized Europe’s competitiveness. “Europe stagnated throughout the 1980s and avoided confronting what was described twenty years ago as ‘the global challenge,’” I wrote. “In order to maintain its position as one of the three poles of the world economic power, Europe’s 1992 plan finally puts a deadline on building the economic unity and competitive resilience envisaged in the 1957 Treaty of Rome.” The benefits were clear: Europe was “’selling at a premium’” on the world market. Belgian, French, and Swedish bourses…all registered increases on the order of 50%…and most other European bourses [rose] 20% or more…Europe can make this restructuring successful by reducing transactions costs, increasing synergies, and coping with stakeholder opposition…Those countries not willing to support a market-driven economy will experience strained relationships with other member countries. They may eventually opt out of the EEC, choosing protectionism rather than integration.” My article was called “Facing the Global Challenge,” European Integration and Global Competitiveness. I presented it at the International Management Symposium in St. Gallen, Switzerland in front of European political and business leaders such as Edouard Balladur (Prime Minister of France), Percy Barnevik (CEO and Chairman of Asea Brown Boveri), Allan Bloom (author of “Closing of the American Mind”), Bill Bradley (US Senator and former NBA star), Arthur Dunkel (Director General of GATT), Alfred Herrhausen (Chairman of Deutsche Bank), Romano Prodi (Prime Minister of Italy), and Franz Vranitzky (Chancellor of Austria). The countries that I suspected might opt out of the Union were the less developed ones (e.g., Greece, Spain, and Portugal), whose compliance with the fiscal conditions of membership such as debt levels and foreign currency reserves had the potential to cause hardship.

In the interest of maintaining stability of global trade and minimizing the risk of recession that could accompany further disintegration, at least the founding members and the former EFTA countries should reconfirm their commitment to economic union.