No Business Sense: Caspian Pipelines Will Cost 5 Times Others And Suffer Loss Of 25% Revenue

Central Asia is fast becoming a region of strategic importance because of large reserves of natural gas being discovered here and prospects of vital pipelines catering to the needs of both western and oriental worlds.  To be more precise, the country which drives this importance is Turkmenistan with its fourth largest reserves of natural gas (an estimated 24,700 bcm of gas reserves, according to the 2014 Statistical Review of World Energy published by BP), ranked only behind Russia, Iran, and Qatar. In spite of such reserves, Turkmenistan has hardly exploited it, with only 76 bcm of gas produced in 2014. While it exports to only China and Russia presently, Europe and South Asia are hungry for Turkmen natural gas, which is leading to rise in production levels.

It is obvious that the rise in demand for natural gas and its rising production are leading to new pipeline projects in the region which are extremely high on capital expenditure (cap-ex). To diversify its exports and satiate the growing demand for its natural gas, huge investment is required to build midstream infrastructure for countries like Turkmenistan. Even now $15 billion worth of two major pipeline projects TAPI (Turkmenistan-Afghanistan-Pakistan-India Pipeline) and Trans Caspian (TCP) pipelines are on radar.  Other projects such as TANAP (Trans-Anatolian Natural Gas Pipeline), originating from Turkey, will play a critical role in transporting gas to Europe, has cap-ex worth $10b (up from $7.5 billion).

Are these high cap-ex projects appropriately budgeted? Are they financially viable? Is there any possibility to reduce the cost? If yes, then by how much? It is important answer these key question while talking about such large investments to find out if the project is viable and sustainable before once can find solution, in case they are not.

At currently budgeted costs, the pipelines including TAPI, TCP, TANAP, and Turkmen East West Pipeline will cost more than others per unit of length. All the pipelines studied were commissioned in or after 2013 to ensure that they are recent and comparable. Of 35 comparable pipeline projects, the average cost of 26 pipelines is $1.47 million per km, with $0.6 million per km (MMBPL Pipeline Extension) being the lower and $2.3 million per km (Rakhine-China Pipeline), being the upper limit of the set. As compared to this, the four pipeline in the Caspian Sea region considered in the study cost $7.26 million per km on an average, nearly five time higher than the rest. The lowest of these is $2.61 million per km (Turkmenistan EWP) which is already near completion. Trans Caspian Pipeline Capex, on the other hand, is exorbitant at $16.67 million per km. 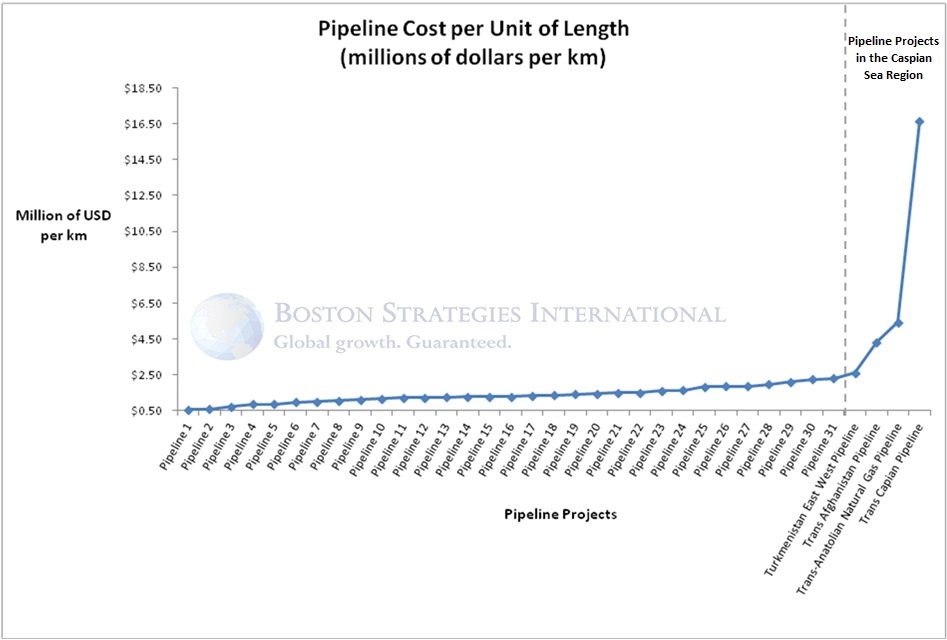 The other major issue that the pipelines in the Caspian region face is that their potential returns are significantly reduced due to fall in natural gas price. Therefore, if we look at the revenue generated by the aforementioned four projects at the current natural gas price, it will be 36% and 25% less than what they could have been earned in 2014 and 2013, respectively.  This is a big blow to the margins on top of high costs.

The cost of each of these pipelines needs to be driven down through value chain cost engineering, astute procurement strategy, and supply contract negotiations. The major cost components of such pipeline projects include construction material such as concrete, equipment for earthmoving, lifting, and welding, besides large number of valves and pumps to be installed along the pipeline and at the pump stations. Labor cost is another major cost component which includes management & engineering labor and construction & support Labor. Other factors that shape the cost of pipeline projects include pipe diameter, wall thickness, terrain and soil type, and pipe mill location.

While I could elaborate on the factors that would normally drive price variations in pipeline construction costs, such as terrain type, pipe diameter, wall thickness, and material sourcing, the order of magnitude of the ‘price gap’ makes this discussion premature.

The projected cost of proposed pipelines such as the Trans Caspian pipeline and the Trans Afghanistan Pipeline are at least twice as expensive per km as the nearest other data point and warrants an objective audit from an independent specialist such as Boston Strategies International (BSI).