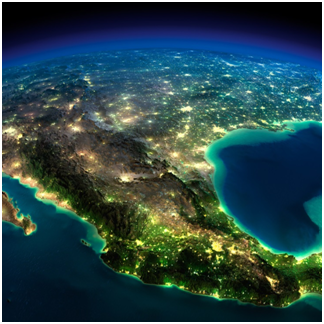 Pemex plans to increase shale activity in the next few years, budgeting over $575m in 2014, highlighting some 200 shale gas opportunities in five geologic provinces in eastern Mexico, and opening up the bidding process for drilling shale fields. It aims to attract as much as $1t in energy investment to exploit Mexico’s shale oil and gas reserves, on the back of the energy sector reform signed by President Enrique Pena Nieto in August 2014.

Based on similarities with Eagle Ford shale in Texas, Mexico’s Eagle Ford shale this is considered to be the country’s top-ranked prospect for shale exploitation. Other basins in Mexico in which drilling has not yet occurred, and where potential is far less certain than the Burgos Basin, include the Sabinas, Tampico, Tuxpan, and Veracruz basins. Pemex (Petróleos Mexicanos), the state-owned oil company, previously identified Tamaulipas, Coahuila and Nuevo Leon, in addition to Chihuahua, as the states where fracking could be used to obtain new energy sources. The other Mexican states officials identified are Puebla, Oaxaca and Veracruz, and Mexico’s technically recoverable shale gas reserves are heavily influenced by the newly discovered Chicuantepec and Burgos.

Shale drilling in Mexico faces many hurdles. Mexico drilled its first shale gas well as recently as 2011, in the Burgos Basin in the North. Drilling was later abandoned by most operators for gas due to low price and high cost. As of February 2013, there were only six productive shale gas and tight oil wells drilled in Mexico (a seventh was abandoned as non-productive). Most of the challenges have to do with infrastructure and technological constraints, and high costs:

The bottom line is that E&P companies seeking to exploit shale plays in Mexico need expert supply chain strategies to manage their logistics and the cost of purchased materials and services. Boston Strategies International has been in supply chain management for oil and gas, and has supported the planning of every aspect of drilling, completion, production, and transportation, as well as downstream activities.