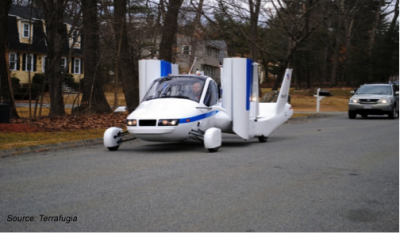 Terrafugia’s production of the first U.S. Federal approved flying car, the Transition, suggests that we have taken a huge step closer to accomplishing a Sci-Fi like story. However, the recent global demonstrations on environment served to remind us that the key question we need to be answering is what fuels will various forms of transportation run on in the future?

Research within this arena has revolved on a number of different alternatives. Hydrogen in theory is an ideal fuel since it provides more energy per kilogram than petrol and only produces water as an exhaust.  When NASA scientists really needed a fuel that would go the distance, they used hydrogen to generate power on the Apollo missions. Unfortunately hydrogen does not seem to be the most favorable alternative – for the coming decade at least – because it is very expensive to produce and requires significant amount of space to store. Hydrogen additionally requires significant changes in the current operating infrastructure, such as determining the optimum process for producing hydrogen in the first place and establishing fueling station networks. Another alternative has been electric fuel through batteries, which can be charged using the current grid and produce no exhaust. However, batteries have a limited travel range and long charge times. Solar power is attractive in terms of cleanliness, but has so far required impractically large components to power vehicles.

The closest realistic alternative to fossil fuels in powering various forms of transportation has been bio-fuels. Despite the huge environmental debate related to this energy source, bio-fuels offer a number of advantages such as: no new delivery infrastructure is needed, it is renewable, and it can be considered carbon neutral. Combining this energy source with electricity to produce hybrid vehicles is also becoming a popular choice for auto producers. In fact, BSI’s 2007 report titled “Energy Prices Re-Shaping the Supply Chain: Charting a New Course?”acknowledged the possibility “that combination hybrid-alternative fuel vehicles will become mainstream within ten years,” but given the low baseline (0.2% of all vehicles in 2004), that prospect could take longer.

The alternative energy frontier has advanced more rapidly than expected. Between 2004 and 2014 the percent of new vehicles powered by alternative fuels in the US rose from 8.9% to 10.9%. With increasing attention being given to environmental stewardship and global warming, we can expect continued, even stronger, increases. Boston Strategies International is helping equipment manufacturers configure their partnerships and value chains for that future.